There’s basically three stories in Book I. You have the story of Arthur becoming king, which starts with the circumstances of his conception. You have the civil war against King Lot and Mister 100 and the others, which ends with a really unsatisfying draw. And you have the weird story of Arthur and Pellinore, guest-starring the Lady in the Lake.

Book I starts off on kind of a low note, inasmuch as Uther Pendragon is not presented as a very sympathetic figure. I knew going into this that women were going to be getting the short end of the stick pretty much constantly. My expectations were so low that knowing that the only women who are named in Book I are Arthur’s mother and sisters, and that mainly they are described as prizes to be won and wellsprings from which sons can be extracted, that doesn’t shock me. However the story starts off with Uther raping Igraine — and by my reading it’s rape inasmuch as she’s not giving informed consent, she thinks he’s someone else — which is about the least auspicious beginning possible. I confess I was tempted to just abandon this project and move on to Romance of the Three Kingdoms, which, really, Le Morte D’Arthur is a warmup for, but I’m pretty sure that for all its virtues Three Kingdoms isn’t going to be much more progressive than Malory on the women-not-being-property front.

So, I press onward, and there’s some good bits. Merlin is interesting, because in this part of the story especially he’s acting exactly in a manner I associate with Gandalf the Gray. He rides in, he gives a king (whom he already has a preexisting relationship with) some advice, and then he rides out without revealing his ultimate agenda. We just take it on faith that he’s on the side of the angels. That’s cool; I honestly hadn’t realized there was precedent for Gandalf the Gray in Malory. In the third story of the book, though, Merlin comes across as a real jackass, constantly harping on future dooms like some hybrid of the Professor from Futurama and Cassandra. I freely paraphrase and interpret as I go, but the bit where Merlin advises Arthur to knight Griflet on the grounds that he’ll be a fine knight right up until he dies trying to prevent Arthur’s best friend from saving Arthur’s wife from execution? That’s right there in the text.

As time goes on I begin to imagine Arthur as being played by Donald Glover, particularly during the wholly bizarre sequence involving Pellinore, which has a dreamlike quality to it. 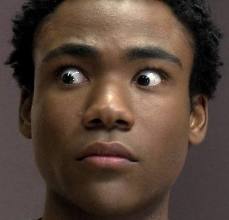 This is how I am picturing Arthur, you guys. You’d be surprised how hard it is to find a good reaction shot of Donald Glover.

The battle against King Lot & Mister 100 and their allies is fairly interesting, and by interesting I mean it’s a horrible bloodbath (Antietam and Chancellorsville combined! Three D-Days!) that ends in a draw with nothing resolved. I’m not actively trying to get a lot of context about the story from the plethora of Malory webpages out there, but I gather that while we’ve been led to believe Lot and Mister 100 and the other kings will play a major role in the rest of the story, that’s not really true. Also, the casual assertion of France and Benwick as countries we should know about, like they’re the two great powers of Continental Europe, that’s pretty funny. I was disappointed to learn that mostly Benwick is associated with southern France and places in southern France that start with a B: Basque, Burgundy, Bayonne, et cetera, with no clear consensus. I had been imagining Benwick as Belgium, just because it’s pretty close to France and England both, plus the king of Belgium riding to Arthur’s rescue is a pretty amusing image.

I mostly like Arthur, though what the hell was up with yesterday’s Massacre of the Innocents plot? That was just out of left field, and weird, too, since it so closely parallels a New Testament story that puts Arthur in the role of King Herod, which, not really a comparison that’s flattering in the medieval or any other era.

Finally, you people are lucky, you have no idea how much jousting description I’ve skipped over and how much more I’m going to have to as time goes on.