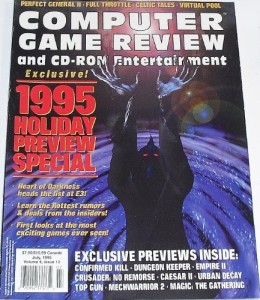 Once upon a time I had a favorite computer game magazine.  This was in 1993 or so, before there was an internet to speak of, and we had to go to newsstands for our game-reviews-as-rewritten-press-releases and breathless interviews with Margot Kidder or Harlan Ellison promoting some FMV travesty.  I remember distinctly the first issue of Computer Game Review & CD-ROM Entertainment that I ever read.  No idea where I got it, but it had an excited description of a battery pack for your laptop that would permit it to run LucasArts’s X-Wing for up to three minutes, so you could save your game in the event of a power outage, an excited description of the trench runner Star Wars: Rebel Assault and its amazing full voice acting, and a lengthy strategy guide to what my fourteen-year-old (ish) self thought had to be the coolest game of all time: Warlords II. 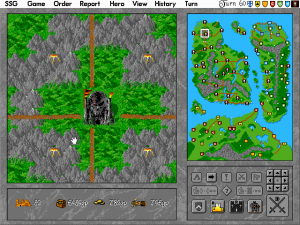 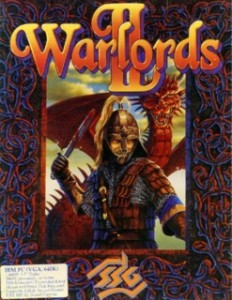 Warlords II was a sequel to a game I’d never heard of, and a turn-based strategy wargame where you controlled cities that built units and used those units to conquer cities to build more units until you had conquered all the cities.  Every city produced some gold, every unit required some gold for upkeep, and you had a hero unit that gave a small bonus to whatever army it was with.  There was a vague sort of Tolkein-esque fantasy scrim over everything.  I demanded this game for Christmas, got it, and played the everloving shit out of it, both against the computer and against my father, who always seriously stomped me.

I loved this game so much that when, a half a year or so later, SSG released an add-on: 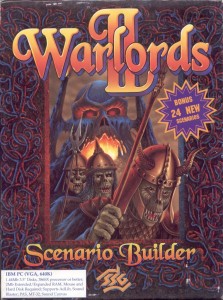 I scooped that up.  Suddenly you could replace the high-fantasy trappings with Old West, Civil War, Boer War, Modern Day, whatever!  You could write your own clever little signpost puns.  You could create scenarios designed specifically to challenge your father!

Later when another add-on was released, I demanded it, too, even though it was packaged with both the base game and the first add-on: 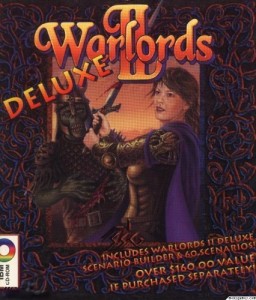 The game used to play this OGG file of a voice saying GREETINGS WARLORD whenever you started it up. For quite a while in high school, I had my Windows 3.1 set up to do the same thing.

And though it was basically just more scenarios and graphics packs, I adored it and played it pretty regularly for years, until when I was in college and Warlords III came out.  Warlords III was actually two games.  The first, Reign of Heroes, took Warlords II and added a couple of wrinkles of complexity to it; different armies in a scenario could have different units, the different units gave different bonuses, and the heroes could have different abilities.  The second, Darklords Rising, released a year later, refined Reign of Heroes.  It was basically what we’d now call a balance patch, released as a separate game.  A separate game I happily paid full price for, I might add. 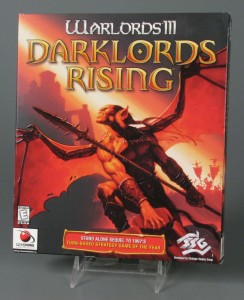 The gameplay was still basically the same as Warlords II, though: 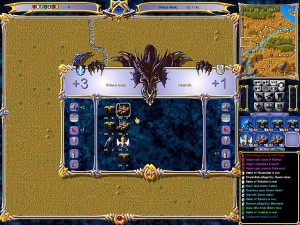 Lord Bane was still a jerk, but he wasn’t using giant skulls with flaming pillar buttresses as his citadels any longer.

I played Darklords Rising for years.  I even bought another copy of it from a disreputable third-party “Classic Old Games” clearing-house website when my CD failed.  When GOG.com releases a 300 GB version of it that will run on my Mac, I don’t doubt I’ll scoop it up again.

Anyway, that brings me to Marvel Puzzle Quest.  A decade or so ago, the lead designer on the Warlords games, Steve Fawkner, was put in charge of a Bejewelled-ripoff.  A hybrid puzzle game and RPG, you might say, or an RPG where the combat system consisted of you and your opponents taking turns playing Bejewelled at one another.  Nowadays instead of “Bejewlled-ripoff” we say “match-3 game,” but the idea is the same. 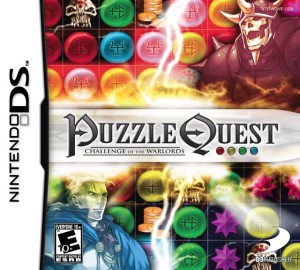 I bought a Nintendo DS I couldn’t really afford, just to play this game. 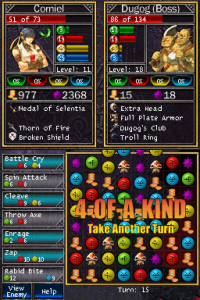 You can see how this is a natural evolution of the Warlords II gameplay. 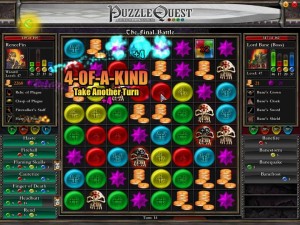 And then what with one thing and another, the Marvel license and the Puzzle Quest license ended up in the hands of the same free-to-play iPhone game company, and the result is Marvel Puzzle Quest.  Instead of a heroic high-fantasy wizard/warrior/priest/barbarian/ranger/druid/whatever versus Lord Bane, in this game you play basically every hero in the Marvel Universe plus some villains, and you fight other heroes and villains.

Different characters have different abilities (three each, one for different colors of mana, sorry, colors of action points), and you fight with three characters at a time.  There are six colors of mana (sorry not sorry), so you need different heroes to cover your various bases and the game encourages you to mix and match.  Hero abilities are loosely tied to the superhero’s comics/movie/IP power set.  Venom, for instance, has a power that nominally entangles the opposition in webbing, stunning them and marking a tile with a ‘web’ label.  He has a second power that does damage proportional to the number of ‘web’ tiles currently on the board.  It’s not super complicated, generally. 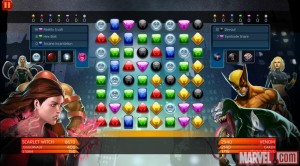 It doesn’t look quite like this on the iPhone but you get the idea.

The game was released about a year ago, I think.  I’ve been playing it since the start of 2015, usually for only a few minutes a day.  Despite my initial assertions to myself that I wouldn’t spend any money on it, I’ve probably spent about $150 over the course of the last eight months.  I like it enough to keep doing it, and I usually lose interest in this sort of thing pretty quickly.  Annoyingly, you have little control over which heroes you have access to, and which have the ability to level, which means that if you want to field a Squirrel Girl, She-Hulk, Kamala Khan trio you have to be patient and/or lucky.