“Alabama? All I know about Alabama is firehoses and football.”

“That’s about all there is to know.” 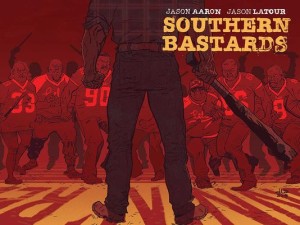 I haven’t been to a comic book store on a regular basis in I don’t know how long. Arguably the last time I went to a store on a regular basis for a once-a-week fix was about a decade ago, when Grant Morrison’s Seven Soldiers meta-crossover event happened. Since then my comics intake has been limited almost exclusively to trade paperbacks and, increasingly, ebooks through Comixology.
Comixology is not the thing I’m describing here, but if you aren’t familiar with it, the short version is it’s a website where you buy access to gussied-up PDF versions of comics that cost more than you instinctively guess they ought to, but nevertheless aren’t a terrible ripoff because how would you go about intelligently pricing access to a gussied-up PDF version of a comic, anyway?
The main appeals of the site are its breadth of offerings. I’m currently reading my way through Matt Fraction and Salvador Larroca’s Invincible Iron Man run (2008-2012), because after hearing good things about it for literally years it occurred to me to see if it was on Comixology. Invincible Iron Man, at least the first dozen issues: good; it presumes you’re already aware of the events of Civil War and Secret Invasion; Tony and Pepper have a messed-up relationship; Salvador Larroca’s art really doesn’t do it for me although I can see why people would like it.
There are three comics I’m subscribed to, via Comixology. This means I get emails from Comixology telling me when new issues are available, and Comixology charges my Paypal for those issues without asking me first. The three comics are Sex Criminals, the Unbeatable Squirrel Girl, and Southern Bastards.

1. Unlike most comics I read and most comics that people make, Southern Bastards features zero superheroes, no magic, an absence of fantastic elements of all kinds; there isn’t even any time travel. (Well, maybe a little bit of magical realism, but damn, it’s a story, you’ve got to grant a little poetic license.) It’s not fantasy, is what I’m saying.
2. Instead it’s a grim picture of life in a small Southern town where a local business magnate holds the populace in his icy grip. In the first issue, a scion of the town returns after a long absence, discovers how bad things have gotten, and sets about making it right.
(You think it’s one story, and it turns out it’s a different story.)
3. The business magnate is also the local high school’s football coach.
4. His name is Coach Boss. He runs guns or drugs or something, but the main way he has the town in his stranglehold of toxic masculinity is football.  Football and barbecue.
5. I’m not saying Coach Boss is the clear inspiration for Immortman Joe in Mad Max: Fury Road, but I am saying there are some pretty obvious parallels.
6. I left the South a long time ago, and I never spent time in the stretch of central Alabama where Southern Bastards is set. I have family in Mobile, the “big city” just past the edge of fictional Craw County. The protagonist of Eugene Walter’s the Untidy Pilgrim, set mostly in 1940s Mobile, could be from Craw County.
7. Of course, the protagonist of the Untidy Pilgrim got the hell out of his hometown and never looked back, maybe because it was like Craw County.  Church on Sundays and Wednesdays, football on Fridays, drinking whenever.
8. The 10th issue features the first appearance of a couple of gangsters (I don’t know a better word for them) from Mobile, and you can tell they’re from Mobile because they wear Mardi Gras masks.
9. There is a moving-van rental company called Y’all Haul. There is a sweet tea company whose mascot looks like the Kool-Aid Man except he’s had a leg amputated on account of diabetes.
10. Everybody is miserable, maybe because of the damn heat and humidity. Everybody takes high school football very seriously.
11. The only good thing about Craw County is the barbecue. 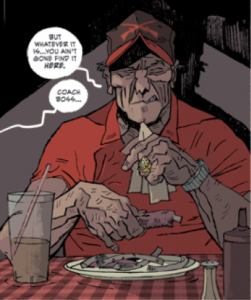