Time goes by, a year or two, and before things have really gotten properly settled Uther gets some kind of unnamed lingering disease, which could be anything from tuberculosis to stomach cancer to cerebral calcification (which is what killed Lenin by giving him all the strokes). While Uther lies around London slowly dying, all kinds of jerks — Scots, mostly — start ravaging the land, because Uther’s too weak to defend it.

Merlin comes to him and says listen, you need to kill these guys.

Merlin says tough shit, if you meet them in battle you’ll win, otherwise they’ll rampage and roar and level Tokyo. Get Ulfius and your boys to build you a litter so they can carry you into battle.

Whether Uther thinks this is a good idea or not, no idea, on account of it’s at about this point that he pretty well loses the ability to speak.

So the dying guy gets loaded into a horse litter, and carried out to the battle, where he lies quietly while his men rally around him and drive back the Northern barbarians. Sir Ulfius and Sir Baristas both kick a lot of Northern ass. I don’t know what Sir Jordanus gets up to. He’s only been mentioned the one time. Maybe I should just let that go. 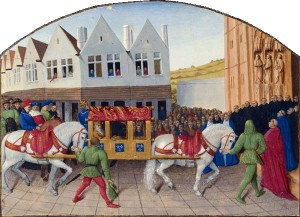 This is a horse-litter. You have to imagine there’s a dying rapist in there.

They carry Uther back to London, where he lies motionless, too ill to talk. Now, I don’t like Uther. I’ve made no secret of that. Thus far in the story — and we’re just barely starting yet — he’s the best-defined character and he’s defined as a petulant misogynistic brat whose best feature is his willingness to do as Merlin advises. By modern standards, if not the standards of the time, he rapes Igraine. That said, his slow and lingering death is a real bummer. I’d call it tragic if he weren’t so very very unlikable.

Anyway, Uther’s court can tell he’s on his way out, so they ask Merlin what to do. Merlin says yeah, Uther’s dying and he can’t talk, but I’ll whip up some magic and make him able to talk, tomorrow morning.

Next morning, Merlin stands by Uther’s bedside, in front of the assembled lords, and does his magic, which may or may not be ventriloquism, which is just a first-level spell, and Uther gives a short speech about how he has a secret son who will be King Arthur, and then he dies. Or perhaps he was already dead before Merlin whipped up the ventriloquism magic, who can say? Maybe he died in the night and his body was used as a prop for a political stunt by his closest friend and adviser, who ruthlessly used him. I almost feel bad for the guy.

Also we’re told Igraine wails and mourns him, so, that’s sad too.